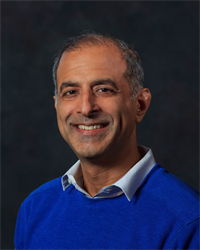 Dr. Aseem Shukla is Professor of Surgery (in Urology) at the Perleman School of Medicine at the University of Pennsylvania. He Endowed Chair and Director of Minimally Invasive Surgery at the Children's Hospital of Philadelphia (CHOP). Prior to returning to CHOP in 2012, Dr. Shukla served as Director of Urology at University of Minnesota Amplatz Children's Hospital and served as the Residency Program Director.  Dr. Shukla is a recognized leader internationally in adapting robotic assisted technology in pediatric surgery, and has written seminal papers describing the process of transitioning from open to robotic surgery for various procedures.  He regularly serves as faculty at training courses in the United States and has mentored surgeons from throughout the world in utilizing the technology.

Dr. Shukla is active in developing pediatric urology as a discipline globally and is a physician lead in the CHOP International Medicine Division.  In that role, Dr. Shukla provides consultation and strategic input in developing opportunities for partnerships and collaborations that serve to increase access to pediatric health care services in South Asia and Gulf Region.  Dr. Shukla leverages existing and ongoing global health experience in direct interactions with government entities, social entrepreneurs and physician leaders to transform and scale delivery in target regions.

In 2009, Dr. Shukla initiated a surgical workshop at the Civil Hospital in Ahmedabad that has become an international model of Indo-U.S. academic collaboration bringing together leading American children's hospital and India's most respected pediatric surgeons to address the vast surgical burden of complex urological anomalies in India.  The annual Bladder Exstrophy-Epispadias consortium is in its 7th consecutive year, and just held India's first international conference dedicated to addressing complex pediatric reconstructive urology dilemmas.  He continues to demonstrate surgical techniques in live operative workshops from Asia, Africa and South America.

Outside of his medical career, Dr. Shukla is co-founder of the Hindu American Foundation (HAF), an advocacy organization based in Washington, D.C. with 9 full time staff that is changing the narratives and shaping policies that affect Hindu Americans from religious liberty and human rights to the portrayal of Hinduism in school textbooks and the media.  Dr. Shukla writes about issues at the intersection of faith, politics and medicine, and has been featured in the Washington Post, Philadelphia Inquirer and New York Times.

There are no financial relationships to disclose.
Return to Fundamentals in Urology (2019)